Catherine Jidulaxi CJ as socially known, daughter of dancehall star Stonebwoy has sparked a fan frenzy with her unique accent in recent viral video posted by her mom, Dr. Louisa Satekla on twitter.

Stonebwoy’s daughter of 4 CJ, could be heard in the video referring to her dad’s image on the big boss energy drink can as “cute guy.”

Listen to CJ eiiii! Wahala for who no get “cute guy” 🤣🤣. @stonebwoy please your daughter says you’re cute. pic.twitter.com/j1mG2rYW6P

Meanwhile #Bhim netizens can’t keep mute as they react the accent spoken by CJ and shower praises on her for calling out her dad Stonebwoy ‘cute guy’. Others also tagged her as a rival to her mom Louisa,probably insinuating that, her mom, she should be on thee look out, hahahahaha.😂😂

@margaret_dery It was at that moment that mummy realized she’s in a competition with her own daughter 😂😂.
@adjowahhenewa Na akwaadaa wie 3nhenefa na )k) sukuu brofo paa nie.
@shelaryn_naa Wahala for who not get cute guy😂.
@thebridalperfection_gh Is her accent for me ..Eeish too much accent cj🥰🥰😍🔥.
@october_very_ownnn You people think she is a kid eeerrrr😂😂😂😂😂 eeeeeiiii grandma CJ😂😂😂😂😂😂😂.
@abena_ygrachEeei is the accent for me 😢😢 Mey3m koraa ahye me 😂😂.
Stonebwoy purchased the franchise and brand of the Big Boss energy drink back in September 2020, and was unveiled as the brand ambassador of the energy drink and took to Instagram to announce that he had acquired the “franchise and owns it now” later that year. 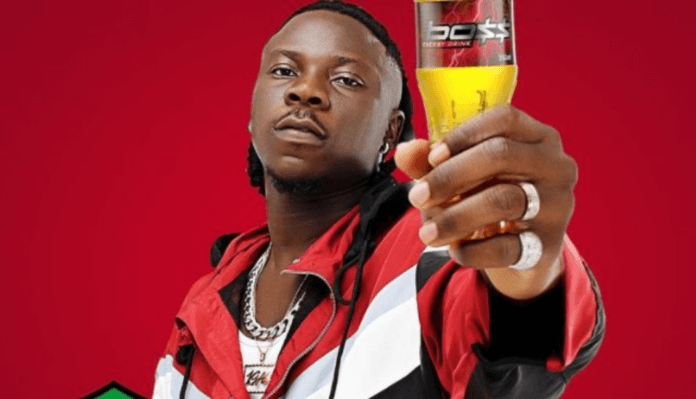 However, the beverage is still manufactured by Bel Beverages. Stonebwoy’s Big Boss Energy drink is made by ultra-modern technologies.