The trailer for the third and final installment of the “Magic Mike” franchise, directed by Steven Soderbergh and starring Channing Tatum, was released on Tuesday and is set to hit theaters on February 10, 2023.

The 42-year-old actor, who plays stripper Mike Lane, was seen performing a racy lapdance for Salma’s glamorous character, 56-year-old Salma, before the pair shared a passionate liplock in the film. Channing and Salma first meet while Mike is working as a bartender in Miami, with the beauty asking, ‘Do you like bartending?’ and Mike responding, ‘It’s not really what I do.’ 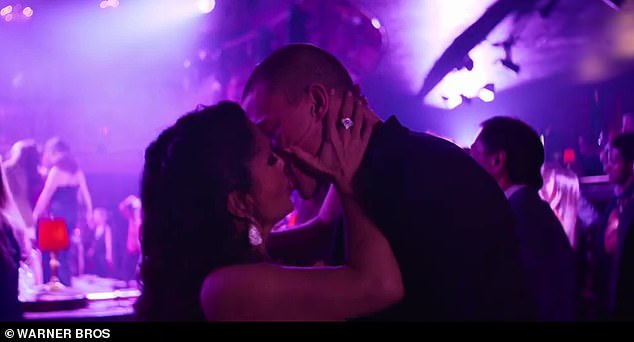 “You came along and gave me this magical, unexpected moment that made me remember who I really was,” Salma’s voiceover character says.

Tatum bids his hunky male stripper persona a final cinematic farewell in “Magic Mike’s Last Dance.” Press notes for the new film state that after a Florida business deal fails, Mike Lane (played by Tatum) decides to move to London in search of “one last hurrah.” A rich socialite (Salma Hayek Pinault) who “lures him with an offer he can’t refuse… and an agenda all her own” is with him.

Watch the trailer for “Magic Mike’s Last Dance” below.

The original “Magic Mike” was based somewhat on Tatum’s experiences as a stripper in real life. The 2012 film, which also starred Tatum, Matt Bomer, Joe Manganiello, and Matthew McConaughey, was a critical and financial success.

Tatum announced last year that a third “Magic Mike” film was in development, with Soderbergh returning as director. He then posted on his Instagram story, “I haven’t danced in years.” And since then, dance has advanced significantly. I made the decision to record the exploration so I could see it later.

When Tatum made an appearance on “Jimmy Kimmel Live!” in February, he made a very specific visual comparison between “Magic Mike’s Last Dance” and its predecessors.

He said to Kimmel, “We are going to change with the times, and I am not going to do the whole waxing thing. “I believe I will simply go natural.”

When “Magic Mike’s Last Dance” premieres in theaters on February 10, 2023, viewers will learn whether Tatum kept his promise.