(Required Credit: @sunny seokkie through Storyful)
Patti LaBelle concert at the Riverside Theater in Milwaukee was cut short Saturday evening due to an apparent bomb threat.
Prev1 of 2Next
Use your ← → (arrow) keys to browse

The “Godmother of Soul,” American R&B singer Patti LaBelle, was reportedly evacuated from the stage of a Milwaukee, Wisconsin, theater in the middle of her concert on Saturday night due to a bomb threat.

In a video taken at the Riverside Theater from the audience’s perspective, the 78-year-old LaBelle holds onto a bouquet while addressing to the public on the microphone. She is dressed entirely in red. When security quickly rushes to her side, LaBelle yells, “Hold up,” and “Wait!” as she is caught off guard.

She is coerced into dropping the flowers by three men in all-black attire, and two of those security personnel swiftly lead her backstage. The audience roars in astonishment as her musicians rapidly follow. As a result, fans in attendance also proceeded to leave. 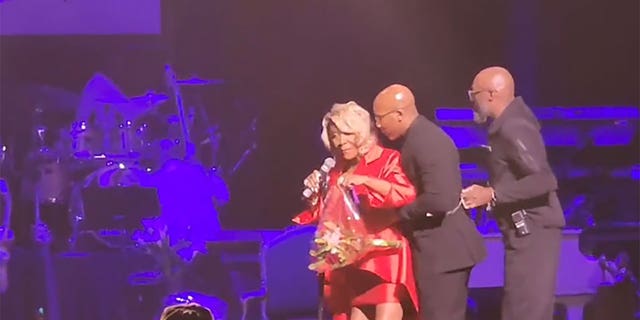 Patti LaBelle concert at the Riverside Theater in Milwaukee was cut short Saturday evening due to an apparent bomb threat. (Mandatory Credit: @sunny_seokkie via Storyful)

“What?” a woman exclaims, as another person is heard asking, “what happened?”  “Tonight’s @MsPattiPatti show at the Riverside Theater has been postponed following a bomb threat investigated by the Milwaukee Police Department,” the event organizer, Pabst Theater Group, tweeted. “We are thankful for the efforts of the Milwaukee Police Department and our customers and staff for their safe and orderly exit.”

“We are working with the artist to reschedule the show,” the group added.

Regarding the bomb threat, the Milwaukee Police Department shortly issued a statement. This was located in the 100 block of West Wisconsin, they said. The venue’s attendees were eventually safely evacuated as police emptied the building. As of now, the investigation continues to be “fluid and ongoing.”

Watch the video below to see Patti LaBelle being led from the Milwaukee stage.

One of the most recognizable performers in R&B and the music business at large is Patti LaBelle. Since she made her debut in 1977, she has released 17 studio albums. “Bel Hommage,” LaBelle’s most recent studio album, was released in 2017. She played in Milwaukee on Saturday night, and her performances continue to draw sizable crowds.

Mccall Kwadzo is a Journalist | ET Reporter | Celebrity Blogger and the Editor In-Chief for mccallkwadzo.com covering celebrities, music, films and more. Story tips can be sent to mccallprosperkwadzo2@gmail.com | admim@mccallkwadzo.com and on Twitter: @mccallkwadzo.

Prev1 of 2Next
Use your ← → (arrow) keys to browse
Comment Form is loading comments...
In this article:bomb threat, Patti LaBelle, Riverside Theater