Finally, the wait is over! The first song created by the Global Sensational singer Tulsi Kumar and the Ghanaian artiste of the year KiDi, “Shut Up,” is now available for us to dance to this New Year. The new version of the track Shut Up, which is a collaboration between singer Tulsi Kumar and Ghanaian musician KiDi, was unveiled on Saturday.

Two musical powerhouses are coming together to give us the craziest Indo-Afro fusion of 2022, so it wouldn’t be an understatement to call this one of the year’s biggest collaborations! The soundtrack for the song, which has gone viral online, was created by Tanishk Bagchi in collaboration with Jack Knight and Soundmanlos, and its catchy lyrics were written by KiDi and Bhrigu Parashar.

Adil Shaikh’s wonderfully shot song video, which was filmed in Kerala’s natural splendor, is nothing short of a visual delight. Ever since the teaser was out, the fans have been anticipating for the full song and now that it’s out, it’s safe to say that ‘Shut Up’ is a must have on your New Year’s eve playlist.

Tulsi Kumar expressed excitement over her first international collaboration by saying, “Shut Up has indeed been a joy-ride to work on! Right from KiDi and me connecting over the idea to actually shooting the entire video, it feels like a dream! KiDi and I come from completely different cultures and music is the only thread that connects us.”

“He is a gem of a person; the process of shooting this video was an adventure as we literally shot the video in 2 days for which the entire experience felt like a rollercoaster and with KiDi it became a fun ride. Made with so much of love and passion, we really hope this Indian version receives much love and adulation like the original one!,” she added.

KiDi added to it saying, “Tulsi Kumar is a talent house and I was completely blown when I first came across the entire idea of recreating ‘Touch It’. An Indian version in collaboration with Tulsi, ‘Shut Up’ got me excited to the core as the whole song captures flavours of India.”

“It doesn’t only sound great but the video has turned out to be a grand spectacle. Capturing the Indian essence in true blue sense, I really hope audience shower immense love on this version as they did to the previous one,” the Ghanaian sensational concluded.

The director of this incredible music video, Adil Shaikh said, “The song itself is very upbeat and lively so I really wanted that to reflect in the visuals. We wanted to show the colours and flavours of India and what better than Kerala to bring this together. The entire video was shot in just two days and Tulsi and KiDi’s energy was infectious throughout, they were up and about for everything which translated very well in the music video.”

As mentioned earlier, the song was only filmed over the course of two days, with very little prep time. KiDi encountered South Indian culture while they were filming the song and became quite fascinated by the Lungi.

We adore how Tulsi is urging him to try the traditional item of clothing since we know he was inclined to do so. The video demonstrates the Ghanaian artist’s apparent love and admiration for Indian culture, as well as his enjoyment of it. 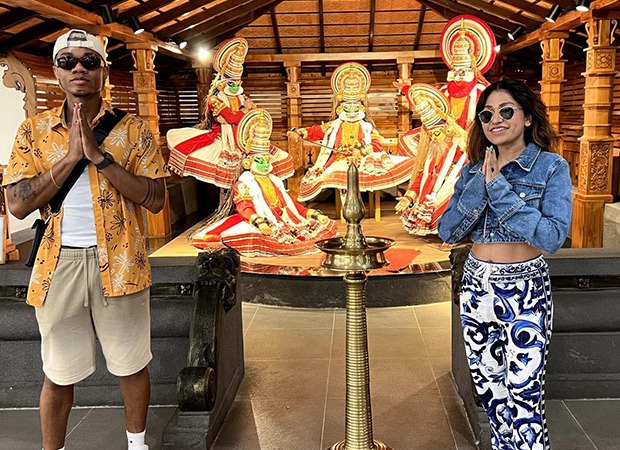 One of the most well-known composers in the music industry today, Tanishk Bagchi, expressed his opinion and stated, “Shut Up is a testament that music is a universal language. Making a fusion of two cultures, two different genres was a wholesome experience! Even the music video was lovely and both Tulsi Kumar and KiDi matched the energy of the upbeat and lively track.”

Ever since the teaser was out, the fans have been anticipating for the full song and now that it’s out, it’s safe to say that ‘Shut Up’ is a must have on your New Year’s eve playlist. We first became aware of it when we saw them both engaging in a chat on their Instagram stories. When the two started following one another and sharing each other’s material on Instagram, it was clear that they were intending to work together.

A video of Tulsi’s most recent popular song, “Killer Haseena,” was shared by KiDi, “Whoa that’s a killer song @tulsikumar15, you have to teach me these steps”, she replied thank you with a follow back to him.

That’s not all, Tulsi Kumar later took KiDi’s track ‘Champagne’ on her Instagram story by saying “Hooked to this one! Let’s jam and groove together soon?” to which he replied “let’s go” 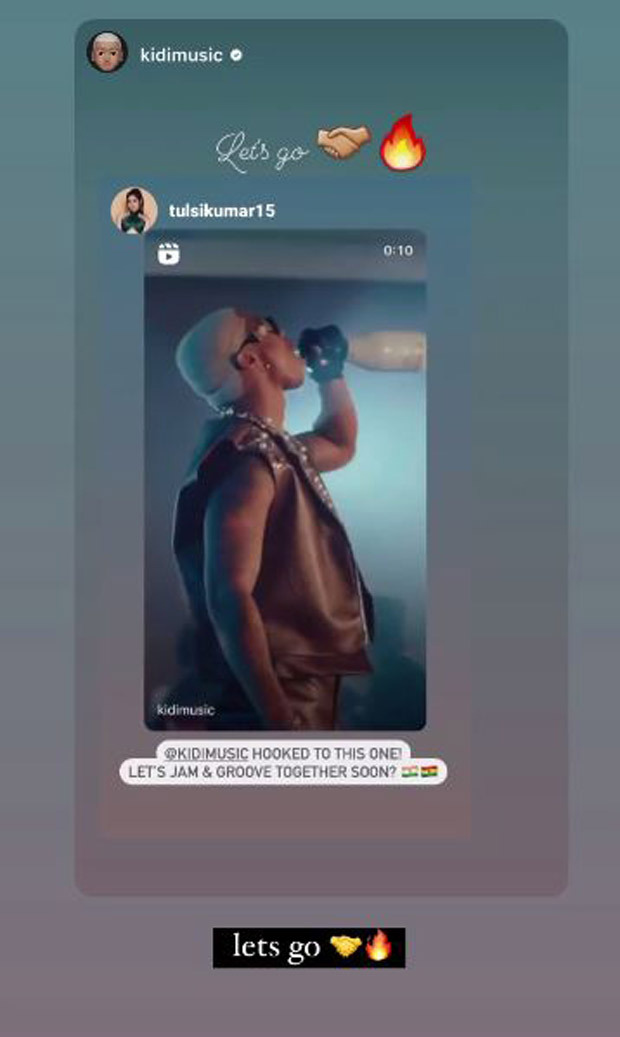 The music video for ‘Shut Up’ is available on the  T-Series YouTube Channel.  It has surpassed 7 million views in one day.